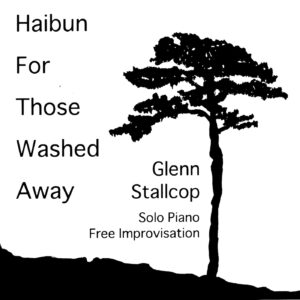 A memorial to the 17,000 people who perished in the terrible tsunami that struck Japan in March, 2011

I recorded these tracks in the fall of 2009, but I didn’t start to edit them into an album until March 2011. I had just started to work on them when Japan was hit with the earthquake, tsunami, and resulting nuclear disaster. Some disasters hit harder than others. Because I had recently been to Japan, my daughter had spent three years teaching there, and because the visuals were so terrifying, this disaster really got to me.

My daughter finally found her former roommate who was in Tokyo, but whose present roommate’s family was from Sendai, at the heart of the disaster. After two weeks, the family finally called to say they were safe. They were at home when the tsunami hit. It lifted their house off its foundation and floated it two kilometers inland. They had a wood foundation, if the house had had a cement foundation, it would have been flattened.

Haibun For Those Washed Away is my memorial to the 17,000 people who perished in that terrible disaster, and the countless thousands of others rendered homeless, jobless, or orphan. I do all the artwork for my albums, but for this one, I had trouble finding a subject. Drawing water or wreckage or debris just didn’t seem to do them honor or justice. I finally found a reference to the “miracle pine” from Rikuzentakata. The pine is the only surviving tree of the 70,000 or so that lined the coastline. It has become a symbol of hope to the survivors. Unfortunately, the salt water has rotted its roots, but survivors raised 15m yen to restore the tree with steel and synthetics and turn the surrounding area into a memorial park.
There are 27 tracks memorializing the victims and survivors. Many of the tracks are short symbolizing those lives that ended too soon.